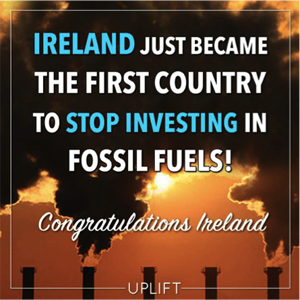 Over recent years, there has been growth of understanding in many parts of the world of the importance of sustainability in not only the global environment but also the global economy.

January 2017 has so far seen this understanding accelerate with major announcements including the announcement from Ireland on 29 Jan 2017.

Ireland just took a big step toward cutting coal and oil out of the picture. Its Parliament has passed a bill that stops the country from investing in fossil fuels as part of an €8 billion ($8.6 billion) government fund. The measure still has to clear a review before it becomes law, but it would make Ireland the first nation to completely eliminate public funding for fossil fuel sources. Even countries that have committed to ditching non-renewable energy, like Iceland, can’t quite make that claim. The closest is Norway, which ditched some of its investments back in 2015. (reference : https://www.engadget.com/2017/01/29/ireland-to-stop-investing-public-money-in-fossil-fuels/ )

Whilst such announcements are individually not major, they do demonstrate the growing acknowledgement of understanding and public support.